HOW DO YOU DO THAT?

I had someone email me asking if I would consider doing an on-line class.  The person really liked some of my techniques.  Because my style is so "improve" I figured I could never do anything that structured.  However I don't mind sharing my techniques.  Feel free to use these techniques and make them your own.  I think of polymer clay as "Adult Playdough".  Play with the techniques and learn from your mistakes.  Some of my favorite discoveries were from mistakes.  I will do a blog post on some of those in the future.

How do I do 3-D collage jewelry, and get the pieces to stick together?

I work with both baked and unbaked pieces, and also incorporate other items into my collage brooches and pendants.  The pendant on the left was made from baked clay pieces plus a metal imitation coin.  (The techniques for creating the colors and textures will be explained in a future blog post.)  The brooch on the right was constructed with baked and non-clay elements on a base of unbaked clay. 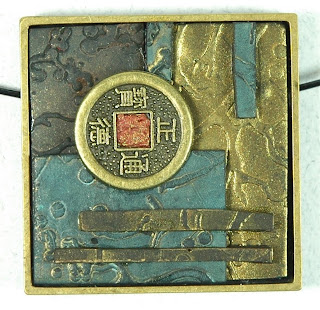 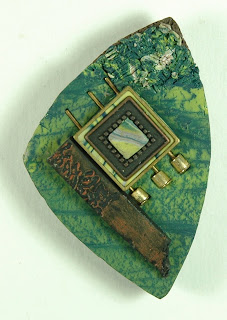 CLICK ON THE IMAGE TO SEE A LARGER VIEW

I hope you find this information helpful.  Please feel free to leave comments.
Posted by JanGeisen at 11:05 PM 2 comments: 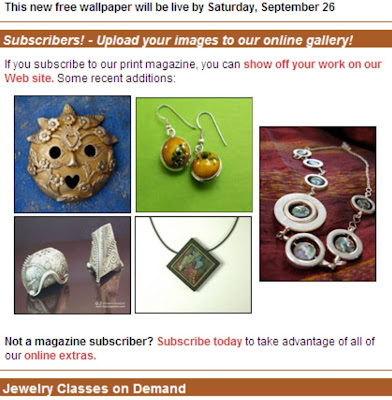 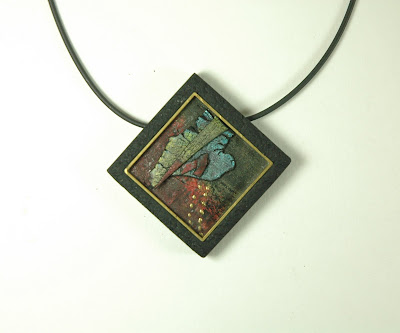