OTHER ARTIST'S WORK USING EXERCISES FROM MY BASIC PRINCIPLES OF DESIGN ARTICLE
I wrote an article for the December 2011 issue of Polymer Cafe magazine called An Introduction to the Principles of Design.  Included with the article were templates and excercises for artists to try.  Jill Palumbo sent me this photo showing her experimentation with the templates. 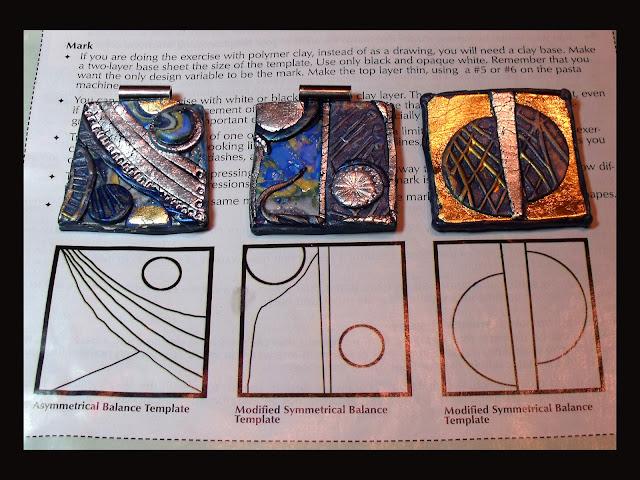 My favorite is the one on the right.  I like the contrast of the highly textured half circles﻿ with the flat gilded areas.  The linear pattern in the circles also repeats the not quite horizontal lines of the center vertical element.  Because the textural lines in the half circles are on a diagonal they also add dynamic movement to the piece.
Jill does some really interesting jewelry using a very heavy surface texture and bright colors.  Check out her photos on Flickr:
http://www.flickr.com/photos/jillpalumbo/

I especially like her Frida Kahlo series and the beads (or maybe brooches?) inspired by Olympia Corvino. 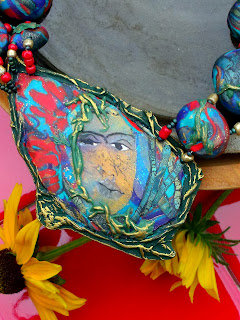 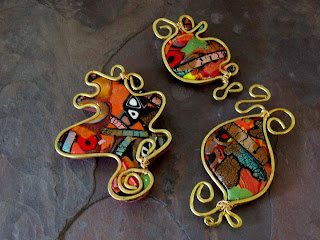 YOU NEVER HAVE TO WORK ALONE
In 1990 I went to visit my friend Mary who lives 600+ miles away.﻿  Because she couldn't take time off work to be with me the whole time I was there, I needed to entertain myself.  So I brought t-shirts and fabric paint to play with.  Mary and I continued to paint t-shirts in the evenings.  We had so much fun Mary asked if we could do it again the following year.  Thus was born A&C (Arts and Crafts) Week﻿.
The next year we discovered polymer clay and tried to create millefiori beads.  We both collect African Venetian Glass Trade Beads.  We were using Cernit brand.  That brand doesn't hold its sharpness after baking, so we were disappointed in the final results.  The following year we discovered Fimo brand.  Nan Roche had also published her book The New Clay, which was the only book on the subject available at that time.  A lot of us referred to it as The Bible.  I still think it is the best book on the market for beginners.
A&C Week has continued every year since.  We probably should call it something else since we only do polymer clay now, with a couple of days worth of exploration with precious metal clay.  It is also 12-15 days of intensive clay play.  It is very hard to go back to our regular lives when it is over.
Recently I was talking to Mary and she was feeling pretty blue.  Winter was setting in, so all the fun outdoor stuff she does (like gardening) was done for the season.  We had occasionally Skyped since we both have computers with webcams.  However neither one of us has thought about Skyping while working - DUH.
So on Tuesday December 6, 2011 - A&C Weekly was born.  Now we can still sit across the work table from each other and talk while we work.  It isn't as easy to see what the other person is doing.  Holding up something in front of the camera isn't the same as passing the item across the table, or getting up and looking over the person's shoulder.  But it isn't bad.  So if you have a laptop computer and friends with laptops that you like to work with who can't be there in person, try Skype (http://www.skype.com/).  It's free and there doesn't seem to be a time limit.  We worked for 3 hours with no service interruptions.  We have reserved every Tuesday night for A&C Weekly until next spring. 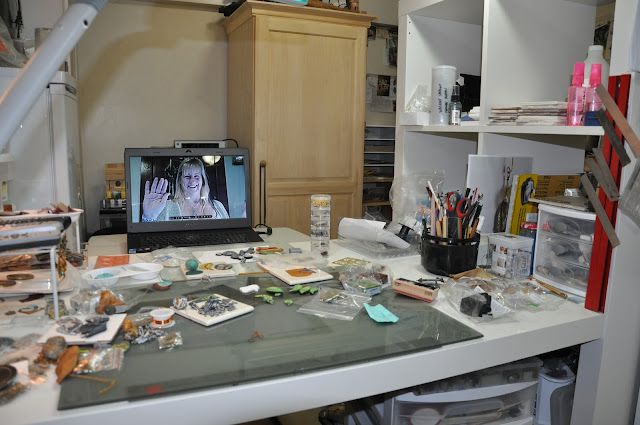 I love seeing what other artists create using the same techniques as I use.  These wonderful pieces were created by people using my "Jan's Jacobs Ladder Variations" Tutorial.  Like I always say - Artists don't work in a vacuum. We are always getting ideas from others, then putting our own spin on them. 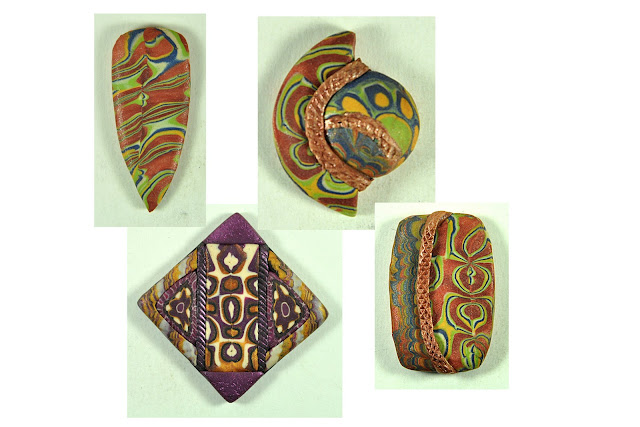 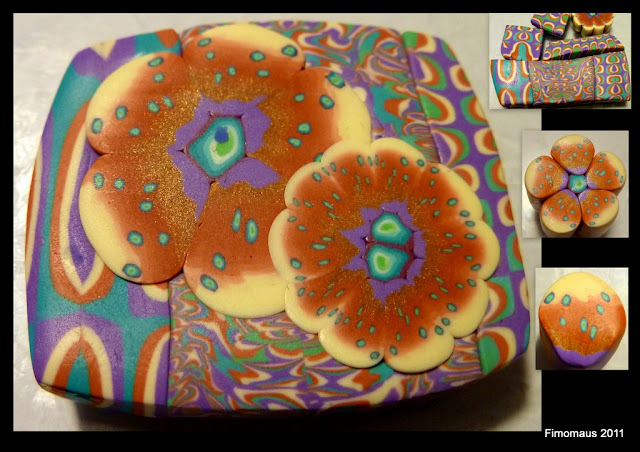 I like to connect tutorials from clay artists that I admire. Here I have the flower of the Iris Mishly mixed with the Laddercane by Jan Geisen.

Check out her other work on Flickr for inspiration.  She has experimented with a lot of different techniques.
http://www.flickr.com/photos/fimomaus/with/6454512949/

Posted by JanGeisen at 9:52 PM No comments: 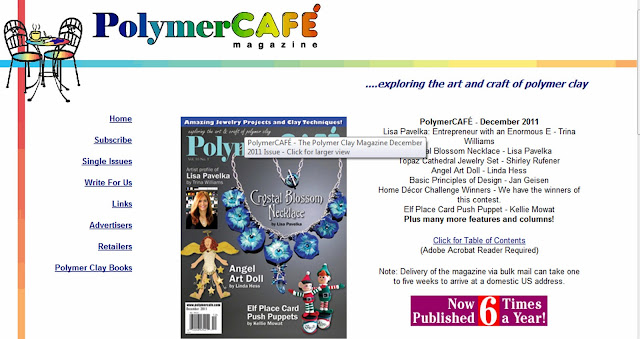 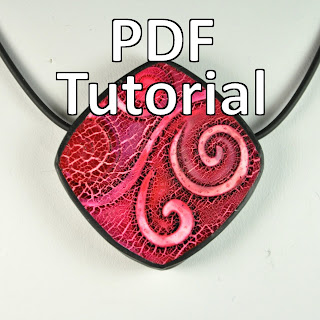 I did a tutorial on crackling polymer clay using alcohol inks for the premier issue of the new magazine From Polymer to Art.  That first issue has been sold old and the publisher has given me permission to sell the tutorial.
I created a slightly expanded version of the magazine article.  The tutorial has more examples of additional, more complicated, jewelry items that I created using the tutorial's crackle sheet.  The tutorial is for sale my Etsy shop:  http://www.jangeisen.etsy.com/.  I always try and have one tutorial listed for sale.  If there aren't any for sale please contact me, or just check again later. 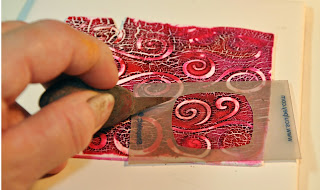 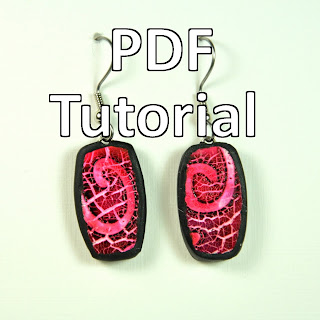 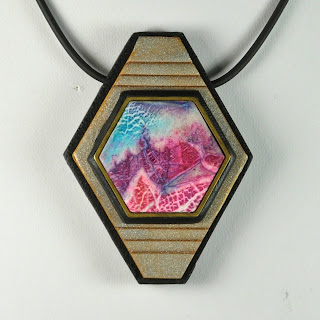 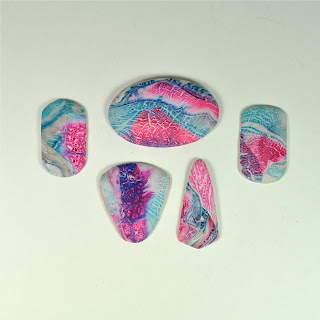 Email ThisBlogThis!Share to TwitterShare to FacebookShare to Pinterest
Labels: alcohol ink, instructions, jan geisen, jangeisen, jewelry, PDF, polymer clay, tutorial
NEW POLYMER CLAY TUTORIAL FOR SALE
I have just finished another polymer clay tutorial.  It was a lot of fun, but more involved than I expected - too many variations, not enough time.  The tutorial shows how to create what some people refer to as a Jacob's Ladder cane.  It contains step by step instructions for two variations of the Basic Jacob's Ladder, plus three of my own.  I have also included a list of 15 other ways to vary the Jacob's Ladder pattern with three of them with photographs.  There is also a section on ways to use the ladder, plus photos with explanations of 13 pieces of jewelry I created with the cane.

The tutorial is for sale in my Etsy shop:  http://www.jangeisen.etsy.com/ 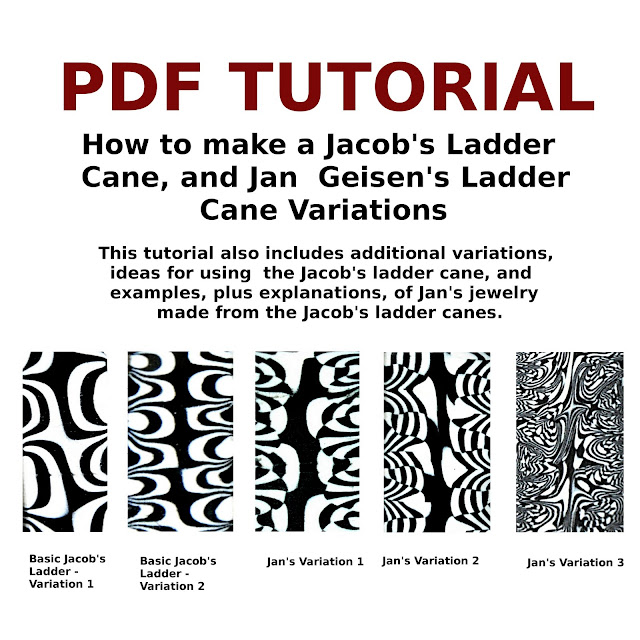 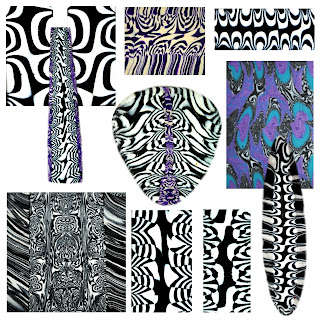 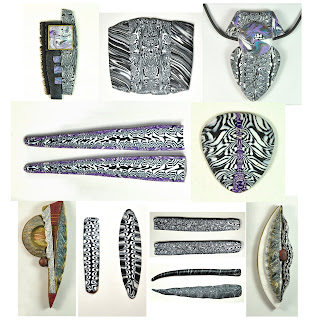 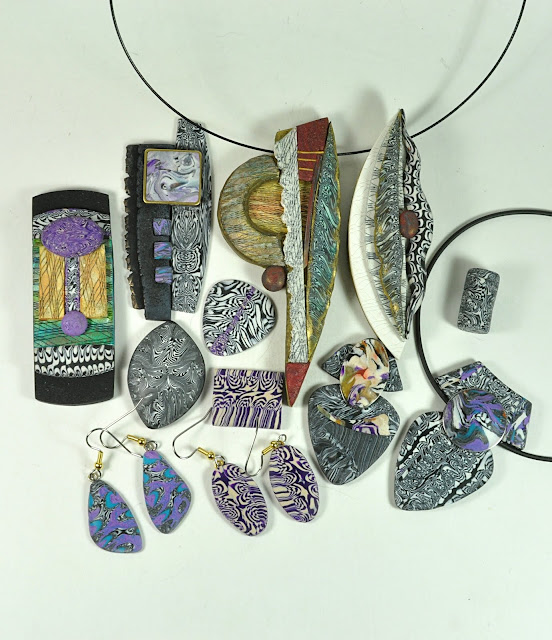 Posted by JanGeisen at 3:47 PM No comments: 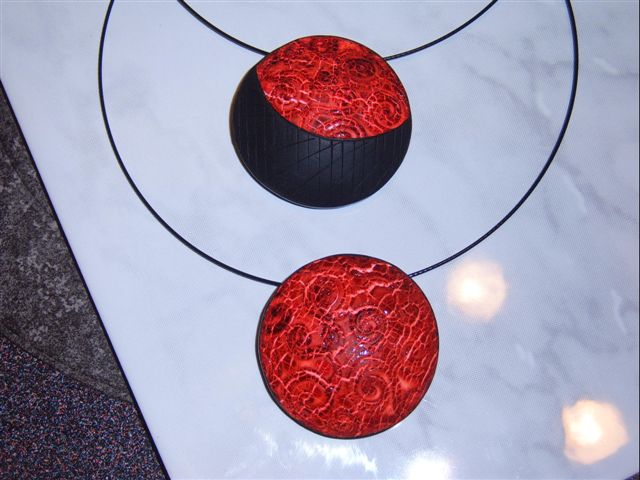 Posted by JanGeisen at 12:12 AM No comments:

CAUTION: SHAMELESS PLUG BELOW
I have put the necklace and earrings that I created for the magazine (From Polymer to Art) tutorial up for sale in my Etsy shop. 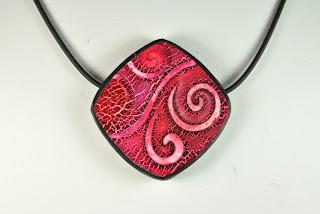 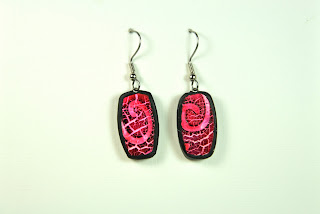 OTHER ARTIST'S USE OF MY TUTORIAL TECHNIQUE
I love seeing what other people do using my techniques.  It is amazing how much variation there can be when an artist puts his/her personal touch into a technique.  These jewelry pieces were created by Madreselva61 who lives in Spain.  You can see her jewelry on Flickr http://www.flickr.com/photos/46799817@N07/ 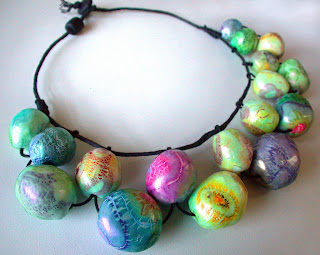 I rarely make beads anymore.  I am going to have to try making some using my alcohol technique.  I really like how these turned out. 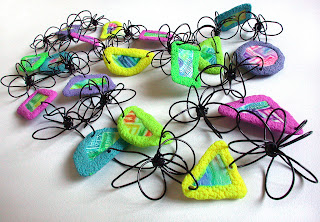 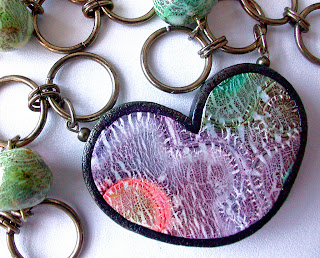 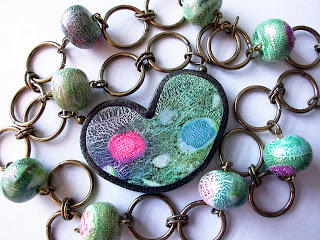 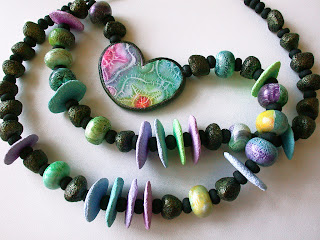 My alcohol technique looks really nice on irregular shaped disk beads too.
Posted by JanGeisen at 7:16 PM No comments:

Email ThisBlogThis!Share to TwitterShare to FacebookShare to Pinterest
Labels: From Polymer to Art, jan geisen, jangeisen, polymer clay, techniques
TUTORIAL
I wrote a for the preview issue of a new polymer clay magazine, From Polymer To Art, that is being published in the Netherlands.  The issue came out in November 2010.  My tutorial showed how I created this pendant and earrings using alcohol inks 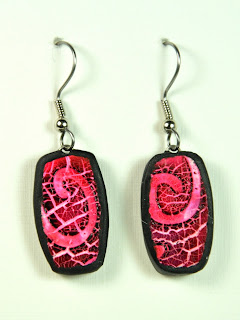 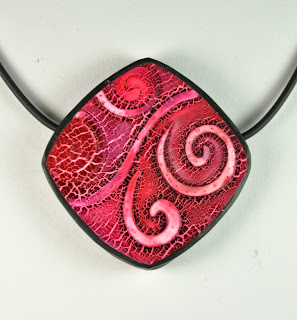 I love making more complicated, abstract, wearable art jewelry pieces.  So for the article the following pieces were also included in the article with a short explanation of how they were created 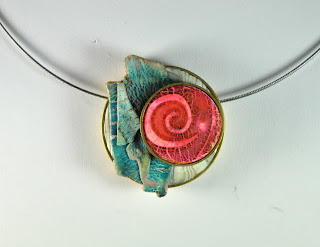 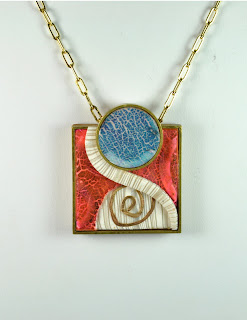 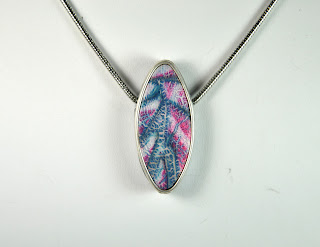 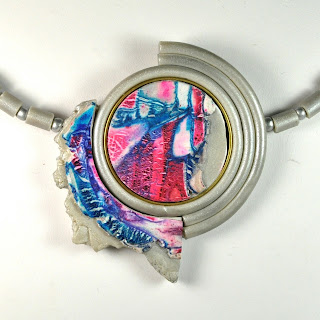